If you are coming to Iceland for the first time, you are in for a treat. Driving in Iceland is just such an experience. The roads in Iceland is a chapter by itself for the roads differ so much. But not all interesting things happens or are seen above ground. There are some very interesting tunnels in Iceland, one of them even has a crossroad in the depths of the tunnel. Up to date, there are 10 tunnels here and one is under construction just north of Akureyri and will hopefully be opened in 2017.

Iceland’s longest tunnel. Finished in 2010 and is 11.000 m long (6.83 miles). You can find it north of Akureyri in North Iceland. It stretches from Ólafsfjörður, going west to Síglufjörður. The tunnel is excellent and easy to drive and it opens up in Héðinsfjörður after 7.1km (4.4 miles) to then continue another 3.9km (2.4 miles) to Síglufjörður. Driving through the tunnel is toll free like all tunnel in Iceland except for Hvalfjarðagöngurinn and the new tunnel north of Akureyri. Officially opened in 1996 and is 9.120 m long (5.66 miles).  Only 2km of the tunnel has two lanes going in each direction. The rest is only one lane wide  It’s located west of Ísafjörður in the Westfjords of Iceland. As mentioned before, this is a tunnel with a crossroad inside it. You might meet traffic going south from Suðureyri while driving this magnificent tunnel.  It’s a well lit tunnel and paved all the way so just enjoy the ride in your rental car and drive carefully. When meeting oncoming traffic in a one lane tunnel, there will be passing places in the tunnel. If the passing place is on your side in the tunnel, you are obligated to turn in and let oncoming traffic pass you. Speed limits are in effect in the tunnels and are always well marked. 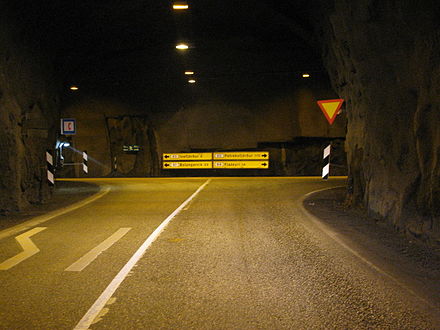 This tunnel north of Ísafjörður opened in 2010 and is 5.400 m long (3.36 miles). This tunnel is a two lane one, traffic going both ways. It’s well lit up and easy to drive. If you are in Ísafjörður, you drive up north to Hnífsdal where you enter the tunnel to Bolungarvík. The first tunnel ever built in Iceland. 30 m (98ft) long and two lanes. You will pass it when you drive between Ísafjörður and Súðavíkur. The ride along that road is simply stunning. This is a tunnel in the north of Iceland. This one opened in 1967 and is 800 m long (1/2 mile). This is a single lane tunnel and the same rules applies as in all tunnels, if you meet oncoming traffic and the passing place is on your side (your right), you are required by law to stop and let the oncoming traffic pass by. Múlagöng is located north of Akureyri. It’s the tunnel connecting Dalvík to Ólafsfjörður. Opened in 1990 and it’s 3.400 m long (2.11 miles). This is a one lane tunnel with passing places. Hvalfjarðargöng just north of Reykjavik is a tunnel that goes under the fjord Hvalfjörður. It’s 5.770 m long (3.59 miles) and 3.750 m (2.33 miles) lies beneath the seabed. There are two lanes on the south side (closer to Reykjavík) and three lanes going north. The deepest part of the tunnel reaches a depth of 165 m (541 ft). There are lay by’s in the tunnel but those are only for emergencies. There are also speed cameras in the tunnel. At the time when this article was written, its the only tunnel where you have to pay toll to use. The toll booth you will find on the north side of the tunnel so when going north, you pay your toll upon exiting the tunnel.

There are fire extinguishers and emergency phones every 125 m (410 ft).

The tunnel has 40 powerful fans to blow out exhaust gasses.

The staff in the toll booths guards all aspects of the tunnel at all times. Oddsskarð tunnel north of Eskifjörður and leading to Norðfjörður is 640 m (0.4 miles) long. It only has one lane, free of charge and has passing places along the tunnel. The tunnel opened in 1977 and is 600 m above sea level. The tunnel called Norðfjarðargöng and is 7.5km/4.66 miles long. It is taking over the traffic that went through Oddsgarð.  It is very well lit, lanes in both directions and one gets a very airy feeling driving it. Almannaskarð tunnel opened up in 2005 and is 1.300 m (0.8 miles) long. This one also has lanes going in both directions. This tunnel connects the south side of Iceland with the East side. There used to be a connecting road where many dreaded to pass but with the opening of this tunnel, driving to the east side has become so much easier. The south entrance is located at 39 m (128 ft)  above sea level whilst the north entrance is 82 m (269 ft) above sea level, giving the tunnel an incline of 4.6%. We are sure you will enjoy the ride through many of these tunnels. When you rent a car with Go Iceland Car Rental, each car has a map where you can find these tunnels but we also sell a much more detailed map at our offices. Please let our staff help you out with any questions you might have about your drive around Iceland.